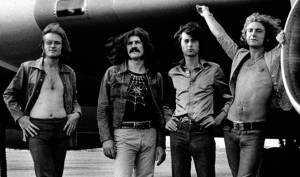 I decided to take a little rant on latest news concerning so called plagiarism of Led Zeppelin’s most famous song Stairway To Heaven.

But let’s start from the beginning. Few days ago, magazine Rollingstone reported that Led Zeppelin are being accused of plagiarism, which in short description means theft or in art – uncreative imitation of different art without admitting credit.  Now that surely sounds like something Zeppelin’s would need. But let’s move forward.

This accusation had come from band called Spirit, hard rock/psychedelic band from late 60’s who claim that one of the most popular and most successful song from Led Zeppelin – Stairway To Heaven – is indeed a plagiarism of their own song called ‘Taurus‘ written in 1968 on their first untitled album. Given the Stairway To Heaven was written in late 1971 it of course could be the possibility but let’s take a look at both songs, shall we.

Now, attorney of Spirit’s would like to prevent re-release of new version of Zeppelin’s albums, which is due at the end of this month, including album ‘IV’ where ‘Stairway To Heaven’ was released.

Taurus and Stairway To Heaven are told to have same or closely similar intro, that Page could have heard on tour between years 68′ and 69′ when both bands hit the stages together. Well.

Stairway To Heaven as we all certainly know is not a mare song base on as I keep repeating – descending chords. And waiting for lawsuit for 40 years is not that clever either. Poor or rich any lawyer would have loved this case, if there, of course, was any.

If plagiarism was to be assessed on descending chords any court in the world would never have day off. Case closed.

Before you leave me though. At the end of the month Led Zeppelin will grant us a little extension of their career by re-releasing their albums with special bonus materials. To which you can look forward at the end of this month – of course all is remastered. For more information visit official site.

SPIRIT is hard rock/psychedelic band founded in 1967 in Los Angeles, California and have on their way released more then 10 albums. Their biggest hit remains ‘I Got A Line On You’. Even though given the lawsuit they try to show their poor sides, they are no amateurs in their field. Their debut album Spirit, which contains Taurus song started as 31st in US Top 200 albums and Spirit are known band in abroad as well. For more information see this link.

I am in awe from the beauty of these items 🌸 Thank you @mimidar.official it's breathtaking 🌸 #mimidar #art #koreanart
I just wanted to share this, since it's important to me and it's such a big milestone I didn't think I'd reach, even few days ago.
Follow RETROVOLD on WordPress.com