Three years in life of a musician are quite a time. And Ed Sheeran’s proves this theory on his new album ‘x’ which easily stands to it’s names. Instead of following his debut ‘+’ – Sheeran does indeed multiplies (x) his music. From simple, yet beautiful melancholy love ballads, accompanied only by his guitar to multi-instrumental modern pop with more pressure behind songs and some unexpected happenings.

Album opens with track ‘One’ which is very much opposite of word’s I have just written. Melody resembles previous album and setting. It does it’s job well and reminds us of his past hit album. Following ‘I’m a Mess’ with more power behind it, still not leaving trade sound.

Probably nobody was prepared for leading single ‘Sing’ which offers very new approach. Safe bet, could this be called. Song features Pharrell Williams, man who is possibly on top of his career. Single is surely most cheeriest song Sheeran ever written and no doubt will stay in charts for quite some time.

Topics in this album may have more mature approach, but have still not changed. Love and heartbreak are still visible themes in new material. This time though, songs are very well build up and listeners can feel the time spent in studio, playing and toying with different possibilities, not just in music but voicing as well. ‘Nina’ and ‘Bloodstream’ are nice prove of such, with well handled back vocals, which is always nice to hear.

Another multiply in new tracks is hardly denied influence with rap music, which could hardly be expected. While ‘The Man’ is mixed rap and pop reminding of 90’s drill. ‘Take it Back’ if fully influenced.

In summary, when you listen to this album it is very nice surprise. Ed Sheeran’s trade mark stays withing his new songs, despite the change, which is very nice treat. Even thought, I welcome power and less sleepy mode of album – third I think will be crucial for this musician – given that will be when he hopefully finds harmony between his two very different albums.

Nice treat is a deluxe edition that, among others, contains ‘I See Fire’ that in it’s full contain could be little preparation for what was to come. 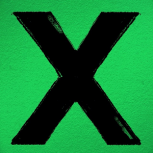