Brittish band MUSE has been one of my favorites for years and I must say, the love for them is growing even stronger.

Almost exactly a year ago MUSE released their seventh studio album called “Drones”, this album set the band little back to the strong rock influenced times and carries important messages alongside finely crafted music. Drones could be described as bands “hardest” album, in the genre.

This band is also famous for the complexity, beauty but also technologic live shows and allow me to tell you, there is nothing like it.

Concert in Prague, Czech republic, which took place last night (4.6) in local O2 Arena was started off with British alternative musician Jack Garratt. What may sound in the studio as a calm crossover between alternative and indie is a multi-instrumentalist show worthy of being support for this tour. And you should definitely check it out.

But back to the MUSE. The show for this year’s album is filled with so many messages which shine through and are clearly delivered. They also go hand in hand with the music and are perfect coexistence. MUSE are using every technology they can, the band arrived with an enormous stage in which center was a moving circle, on that you could always spot drummer Dominic Howard, who had his own amazing solo in the middle of the show. You could also spot flying shining spheres, not to mention enormous drone plane.

From there the stage moved both directions where the leader of the band, as they say, singer, pianist and guitarist Matt Bellamy and bass guitarist Christopher Wolstenholme regularly visited, played and rocked. Everyone no matter where standing or sitting could enjoy all the atmosphere and all the looks. 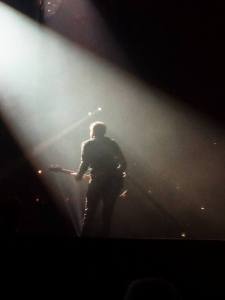 The show was kicked off and closed with a choral, reminding just how many victims of drones and war conflicts there already are. That topic was supported by charity action. MUSE decided to give great support to “Doctors Without Borders”. You could buy T-shirt but also borrow visual reality glasses to see the biggest refugee camp in France for yourself. As usual, the perfect band. You could not only enjoy a great show but also give money for a great cause.

The show was truly a thing of beauty, not only Bellamy delivered all songs in perfect quality as a singer, but all three guys keep reminding us that they are simply put, brilliant musicians. The show also has the right length, you get to jump around, you get to think about the lyrics, you get to sway to Feeling Good, rock to Supermassive Black Hole or Plug in Baby but also feel the emotions during Starlight, Mercy or Madness. The show was simply put the best one I have ever seen.

If you are still ahead of Muse tour and don’t have tickets, believe me, it’s worth every penny. I myself can’t wait to see them again.